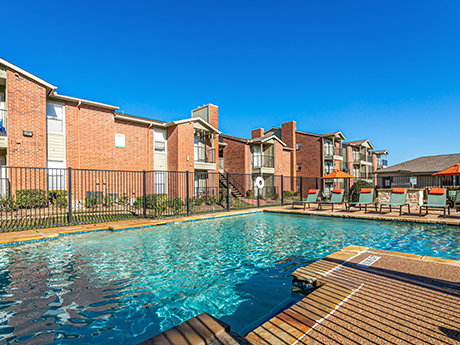 Marcus & Millichap recently brokered the sale of Dakota Ridge, a 272-unit community located on the city’s south side that was originally built in 1985. With demand for all types of housing outpacing supply, there is strong investment appetite for value-add deals like this one.

The multifamily segment in Fort Worth is in a great position. The metro’s vacancy rate slid down to a multi-decade low of 3.1 percent last year, which facilitated stellar rent growth as the number of available rental units plummeted.

Fort Worth’s average effective rent grew more than 15 percent in 2021 to $1,276 per month, and the elevation in 2022 is expected to remain in the double digits. Behind this momentum is robust household formation as citizens relocate to the metro for greater job availability, cost-of-living considerations and quality of life.

An average of 16,300 new households were created annually in the Fort Worth metro area over the past decade, and the 2022 addition is expected to eclipse that benchmark by about 20 percent. This rate of household creation is about twice as fast as the national pace and is happening at a time in which the barriers to homeownership have rapidly intensified, pushing much of the new demand toward the rental segment.

The median price of a single-family house in the Fort Worth area climbed to $317,800 in the first quarter of this year, up more than 20 percent relative to the same period of 2021. Rising home prices widened the affordability gap, or the difference between an average monthly mortgage payment versus a rent obligation.

In the first quarter of last year, the spread between the two figures was $690. Now in the opening frame of 2022, that measure has increased to $976. This gap has likely gotten even more severe in the second quarter as mortgage rates have surged.

This environment makes it particularly challenging for first-time buyers to make the transition to ownership and hinders the ability of owners to move up the quality stack, ultimately keeping the for-sale inventory of more affordable entry-level homes very low.

The lack of budget-friendly houses on the market, paired with higher borrowing costs and a substantial gap between mortgage and rent payments, will sustain robust demand for rentals, warranting greater multifamily construction activity in Fort Worth.

The total apartment inventory in the Fort Worth metro is on pace to grow by at least 6,500 units for the third consecutive year.

Prior to this three-year stretch of ramped-up construction activity, builders delivered less than 2,500 rentals annually from 2000 through 2019. The jump in development is necessitated by record-low availability, and while the wave of new deliveries could result in a slight uptick in vacancy this year, the rate will remain historically tight.

Areas of Tarrant County with the largest construction pipelines as of April include North Fort Worth-Keller and South Arlington-Mansfield. Both submarkets are well-positioned to receive the new supply.

In North Fort Worth-Keller, apartment vacancy shrunk by 380 basis points year-over-year to 1.7 percent in March 2022, despite local inventory growth of 8 percent during that span. Similarly, in South Arlington-Mansfield, the submarket’s stock expanded by more than 10 percent over the past year, yet vacancy shed 50 basis points to 3.4 percent.

The logistics boom and corresponding hiring activity are favorable trends for rental demand in Fort Worth suburbs. In the opening quarter of 2022, there was a flurry of 300,000-plus-square-foot move-ins by industrial tenants.

Saddle Creek Logistics, H-E-B and Truvant took up floor plans meeting these criteria in the Interstate 35 corridor, both north and south of Fort Worth. Large operations typically translate to sizable labor needs, and many workers will favor housing options nearby.

The North Fort Worth-Keller and South Forth Worth submarkets are poised to benefit, especially the Class B and C segments here, as wages in the industry often align with mid- and lower-tier rental rates. Each of these suburban areas boasts Class B and C vacancy rates of 2.5 percent or lower as of the beginning of the second quarter, and availability could compress further as the year progresses.

Foot traffic in entertainment and office-heavy districts like downtown Fort Worth and central Arlington has climbed notably after being subdued by the public health crisis, as employees return to workplaces and people venture out to sporting events, theme parks and night life venues.

Revived activity in these corridors benefits apartment demand in a variety of ways. Workers returning to offices may be inclined to live closer to their workplace, following a period when remote work allowed the flexibility to live in distant suburbs or even other states. This shift should underpin demand for upper-tier apartments in these locales.

At the same time, greater consumer activity at shops and restaurants near office and entertainment districts — like the urban core of Fort Worth and the area encompassing AT&T Stadium, Globe Life Field and Six Flags Over Texas — supports hiring in the service industry. This in turn bolsters demand for proximate workforce rentals.

During the yearlong period that ended in April, multifamily asset deal flow in Tarrant County more than doubled the total from the prior 12-month stretch. Investment activity increased the most significantly in Arlington, as well as in southwest and east Fort Worth, with these three areas accounting for nearly two-thirds of overall trading in the county during the past year.

Arlington is a popular target for many out-of-state buyers and institutions pursuing top-tier complexes with higher cap rates than can be found in coastal gateway markets and some other top-performing metros in the Sun Belt. Class A and B apartments with more than 200 units trade frequently in Arlington, typically garnering price tags above $200,000 per unit.

Private investors seeking comparatively lower entry costs are concentrating on Class B and C complexes on the southwest and east sides of Fort Worth, especially the Woodhaven, Wedgwood, Western Hills neighborhoods and communities near Texas Christian University.

Who won Invitation Head of Household?

Engineered Hardwood or Luxury Vinyl Planks – Which Should You Choose?